Whitby was one of my favourite towns in England when I was growing up.

My school class did geography fieldwork there.  For one assignment, I stood on a remote side street, where I had to count passing cars for an hour.  I think there were six.  Maybe I added a couple out of boredom.

At least we got to make lots of colourful charts and maps using the combined data, and I suppose our teachers got a free hour in the pub.

The main thing, though, was that Whitby was one of the seaside towns that we used for family outings when we were living in North Yorkshire.  Each time, we had to do all the sights: the fishing boats bobbing at the quay, the whalebone arch over the footpath, the 199 steps up to the churchyard following the route Dracula had taken.

Then we'd stroll back along the cobbled streets, where my mother would disapprove of the smell of fish and chips and my father would look disappointed.

Our route home took us up from the town centre and along the cliff-top.  Up there, above the lingering aroma of cooking fat and malt vinegar, there was a weather-beaten crazy golf course of 12 holes or so.  I used to love crazy golf (well, who didn't), but this was a set-up that I particularly liked.   The last hole was one of those affairs arranged so that you could only have one attempt.  The ball would go past a net of some sort and drop into one of a series of holes out of reach of the player.  There it could be collected by the ticket seller, marking the end of the round.   There was a sign above the last hole that said "ring the bell and win a free game".

The free game was such a child's objective.  I fantasised that one day I would be able to get my little ball up the ramp and between the windmill sails at just the right angle to fall into the correct hole to make the bell ring.  Like a parrot wanting a cracker, I suppose.

Finally, one day, after many visits in the stinging salt-air wind, I actually managed it!   I got the ball into the one hole in a dozen that would ring the tinny little bell.  Then, full of excitement, I ran up to the wooden ticket booth, all peeling paint and splinters, to claim my free game.

I'm sure this taught me a lesson in expectation management, but I am reminded of it now by a round of medical tests that I'm currently taking.  Each test so far has been a success in that it has been negative, but each test points to the possibility of a further test.

With each test result, I ring the bell and win a free game that I find I didn't really want.

Posted by Kanikoski at 17:00 No comments:
Email ThisBlogThis!Share to TwitterShare to FacebookShare to Pinterest
Labels: commentary, travel, UK

Teasing a new poetry project on the theme of climate change....

The cuckoo's gone
after Anon.
Warming is icumen in,
We have gone cuckoo!
Blow hurricane
And fire in rain
And blow tornado, too.
Gone cuckoo!
Glaciers are a-calving ice
And with them rise the seas.
Tidal waves slam
And dams burst, damn!
They kill the birds and bees.
Gone cuckoo!  We've gone cuckoo!
Gone cuckoo!  Farewell cuckoo!
Support a poet. Buy a book.
Quarantining: poems in the time of Corona
Magnetic Resonance Imaging: lyrics of love and loss
Those Footsteps Behind: around the world in 50 poems
Posted by Kanikoski at 03:30 3 comments:
Email ThisBlogThis!Share to TwitterShare to FacebookShare to Pinterest
Labels: authors, climate change, madsong, parody, poetry

We are a writer

It's nice to be noticed, and this week sees yours truly given a profile piece, including an interview and a selection of poetry, as the featured Monday Writer in Sentinel Literary Quarterly.
Publishing a book is often compared to giving creative birth, so receiving just a little recognition of one's bookbabies ... well, it gives one just a slightly warm glow inside.
Read the full profile piece here.
Get copies of the poetry books here.

Quarantining: Poems in the Time of Corona 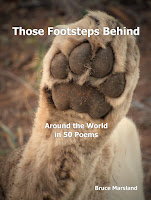 Those Footsteps Behind: Around the World in 50 Poems 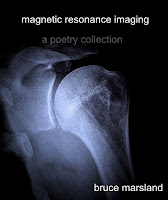 A bit of a bit of Bruce's poetry is for sale!

Yes, there are now two ways to own your very own bit of a bit of Bruce.

My very own piece of Amazon virtual real estate, in the form of an author page, is up and running.  It includes a feed from this blog, so don't get lost in the ol' click to infinity there.  Just choose a book and buy it.  Simple.

Or, if you're more of a kind of indy type of person who prefers to go to the authentic source, the alternative kicks involve heading over to my *other* author page on Lulu.  Get the feed direct from the horse's mouth, so to speak.  Hipster heaven.

Posted by Kanikoski at 20:00 No comments:
Email ThisBlogThis!Share to TwitterShare to FacebookShare to Pinterest
Labels: blogging, books, poems in the time of corona, poetry, writing
Older Posts Home
Subscribe to: Posts (Atom) 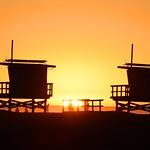